My VS Code setup - Making the most out of VS Code

This is part of my "Linux environment for developers" series

Visual Studio Code(I like the sound of VS Code better), I just love it. It is my primary code editor.

I always loved lightweight editors over IDEs. Many years ago I was using Eclipse for development and Notepad++ with some plugins for all other lightweight stuff. Then I discovered sublime text and was using it for a while. I still was finding Eclipse too heavyweight when I was doing web development. Then came Brackets from Adobe. It was a fairly nice editor especially for web development and I started using it heavily for web development. But Brackets was bit slow back then on a large codebase. Then came Atom which revolutionized the NodeJS desktop application landscape by introducing the Atom shell which ultimately became Electron. So I switched to Atom and loved its slick interface and nice pluggable features. It became my primary editor for all web development.

So Electron paved the way for VS Code and though at first, I was skeptical due to the association with Visual Studio, I tried it out and was amazed by its speed and user experience. There was no turning back now. I slowly started using VS Code for most of my day to day development, except for JVM development which I was using IntelliJ Ultimate by now and it is hard to beat IntelliJ for JVM development. Fast forward now below are the editor/IDE I use for development.

Of course VS Code makes all this possible by allowing the use of plugins and there is a lot to choose from. Here are the plugins that I personally use to work on the above-said languages. You can use the code --install-extension command to install them from the terminal.

Based on the Languages you work with you can add syntax, utility and language support plugins for those. I use the below

The Java support indeed is getting better and better, so I hope one day I can completely switch to VS Code. 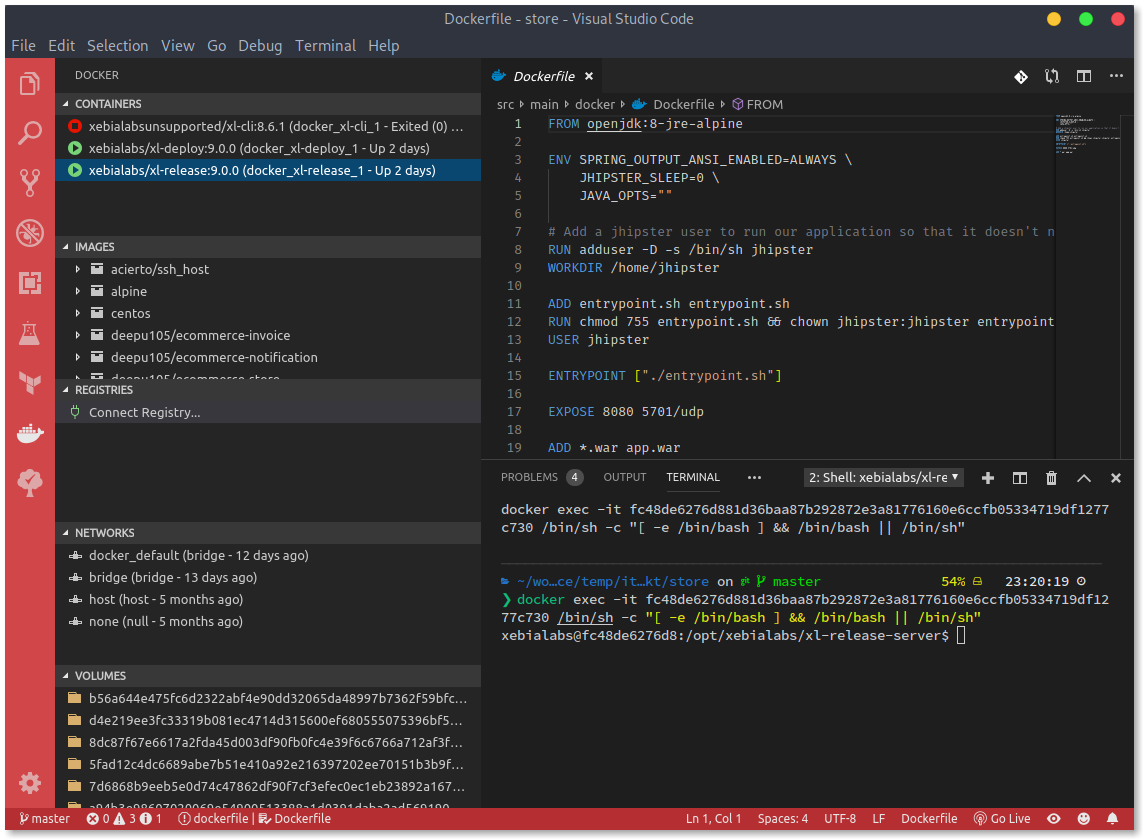 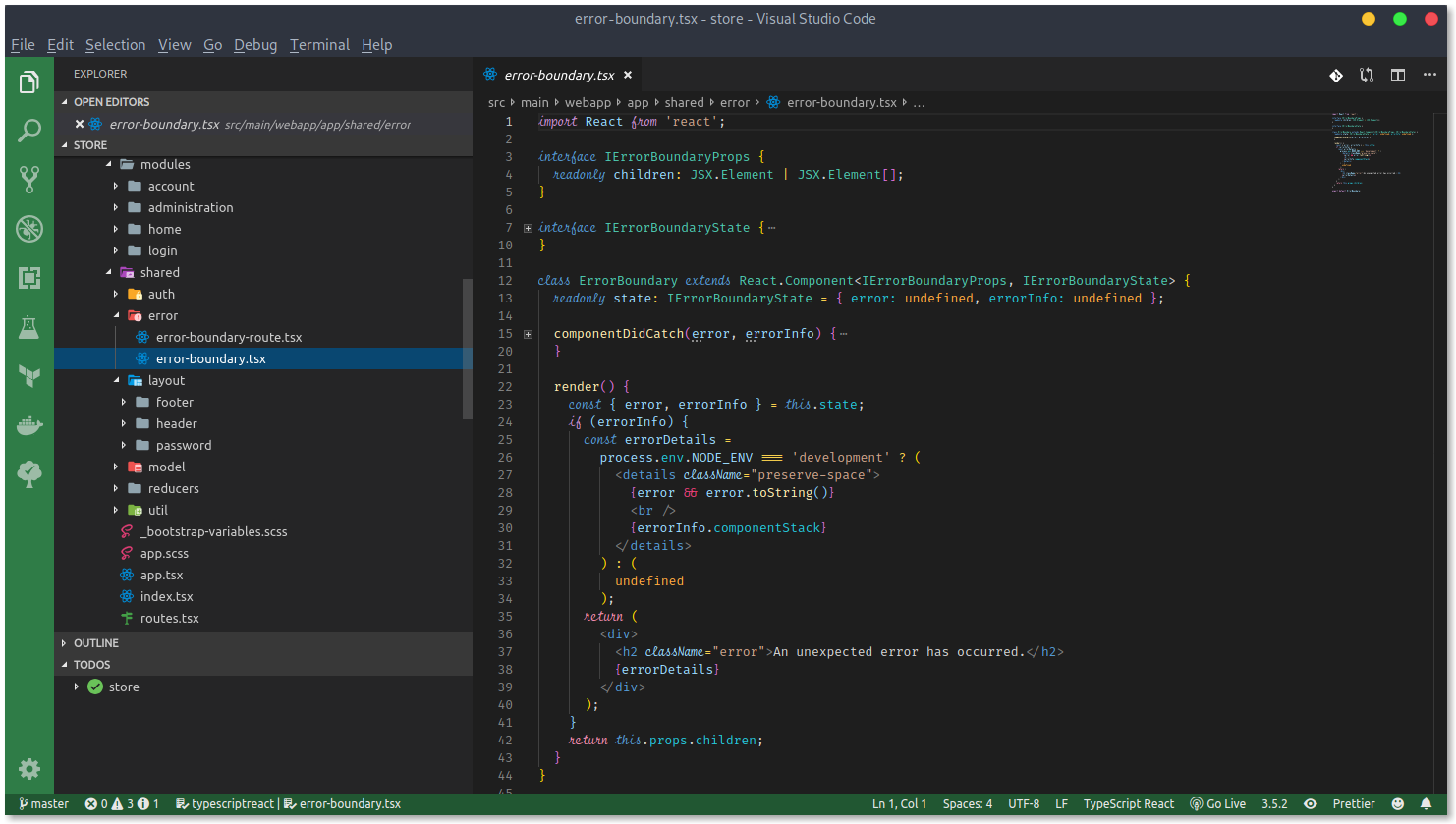 My default theme. Similar to VS Code default dark theme but has support for FiraCode and Operator Mono fonts. I personally use FiraCode.

A nice icon theme based on material icons.

Subtly changes the workspace color of your workspace. Helpful to identify when you have many windows open.

Convert between different cases. Trust me this is so handy

Useful to store re usable snippets.

EditorConfig for VS Code

Makes it easy to work with .gitignore files.

Hides patterns defined in .gitignore from the editors explorer.

I have bad muscle memory so wanted to use the same keyboard shortcuts as IntelliJ. There are mappings available for Sublime, Atom and so on.

Aggregate TODO, FIXME, etc in a tree view in explorer.

If you are using Zsh shell with Oh-my-zsh like me as explained here, you might want to do the below to get the same terminal experience in the integrated VSCode terminal as well. 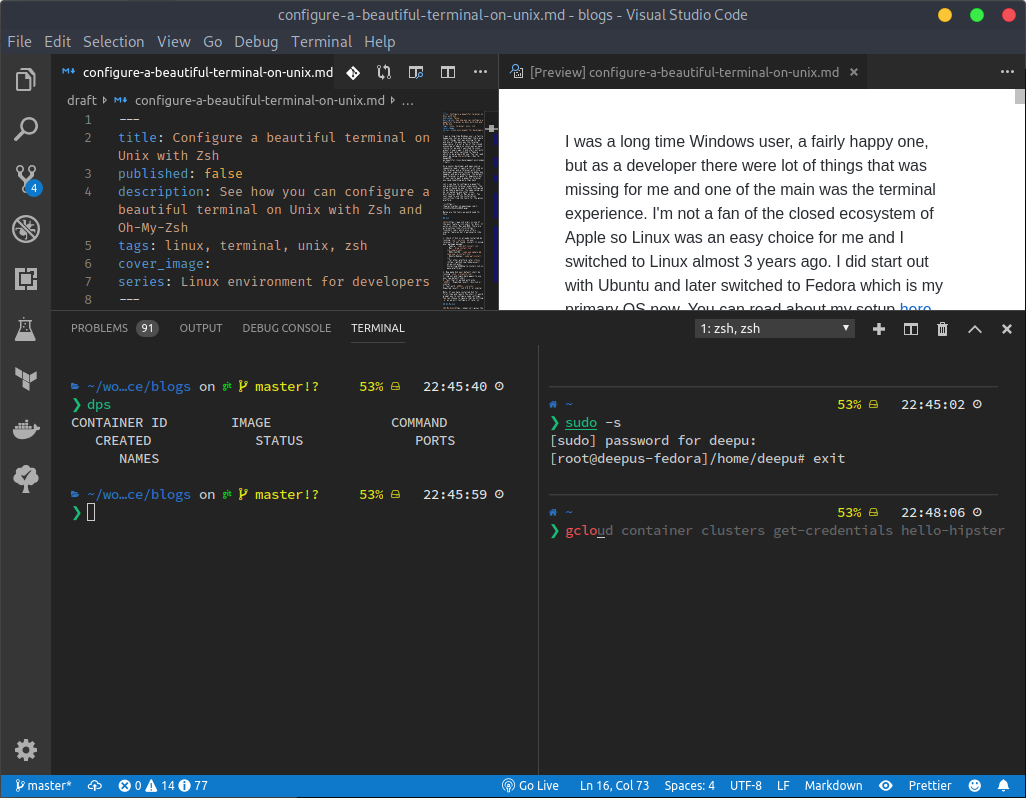 Replace linux with osx if you are on a Mac.

This might seem like too many plugins but on my configuration VS Code is lightning fast and loads up immediately and is faster then IntelliJ to load and work with. The beauty of VS Code is that you don’t need all the plugin all the time, you can disable the ones not required per workspace to make it even faster.

Many people ask me why I use VS Code when I have IntelliJ and my answer have been always the same. IntelliJ is great but its also quite heavy. While all those advanced features are needed for Java, Scala or Kotlin development, VS Code is perfectly capable of giving a nice developer experience for lightweight languages like JS, TS, Go, Python, Rust, Ruby, etc.

As a regular user of both IntelliJ and VS Code, I prefer VS Code as much as possible. The user experience is much nicer for my taste. In fact, I like the developer experience in VS Code better for JavaScript, TypeScript, Web, Python, and Golang. Also switching between them for JVM projects and others don’t feel weird for me as I have the same keyboard mappings for both. The only time I fire up IntelliJ these days is when I want to do full-fledged Java development. For everything else, I use VS Code.

I hope you find this useful. If you have any questions or if you think I missed something please add a comment.

« Prev post in series Next post in series »
« My reflections on Golang How to set up Java microservices with Istio service mesh on Kubernetes »
Never miss a story from us, subscribe to our newsletter