My sleek and modern Linux development machine in 2021

This is part of my "Linux environment for developers" series

One of my most popular posts of all time was when I wrote about my beautiful Linux development machine in 2019. Since I got a new machine and a new setup, it naturally calls for a follow-up.

By now, I’m a die-hard Linux user. It’s been five years since I’m using Linux as my primary OS. I would take a Linux machine any day over macOS or Windows. I own a Windows gaming PC and a Macbook pro from work. Still, they are nowhere near the Linux experience, personally for me. My primary driver is my Linux laptop, and I can’t be any happier with it (well, I can, I’ll come to that at the end of the post).

So a Dell Precision from 2016 was my primary device until last month, and it is still going good. Fedora runs smoothly on it for most parts. There is some minor glitch now and then but nothing that bothers me. What is a Linux experience without glitches, right? 😉

But that setup is almost five years old now, and sometimes it shows from the increased CPU load and fan noise. Applications like Chrome, Slack, and VSCode aren’t becoming any lighter in CPU and memory usage. So when I had a chance to get a Linux machine from my new job, thank you Okta, I went all in and got myself a Dell XPS 15 9510.

So here I’m detailing essential aspects of my setup and hoping it will inspire more people to use Linux. I also wrote about the state of Linux on the desktop. Check it out if you are interested in Linux. You might be surprised.

So when I was choosing a new laptop, I narrowed my options down to either Dell XPS 15 or Tuxedo Pulse 15. Form factor, CPU, and memory was the most important factors for me since my work involves working with Docker and Kubernetes, polyglot development and travel. In the end, I chose Dell since Tuxedo had some issues with multiple monitors via USB-C as it didn’t have thunderbolt support.

This is not just my work laptop; it’s my primary machine for all of the below.

The configuration of the machine is also quite crucial for any development setup.

I selected a custom configuration from Dell to get the best possible setup at that time. It’s not cheap, but my company, Okta, provided a handsome budget. But I do think it can be a lot more competitive in pricing like Tuxedo and the like. This, in my opinion, is one of the best Laptops for developers. So here is what I have. 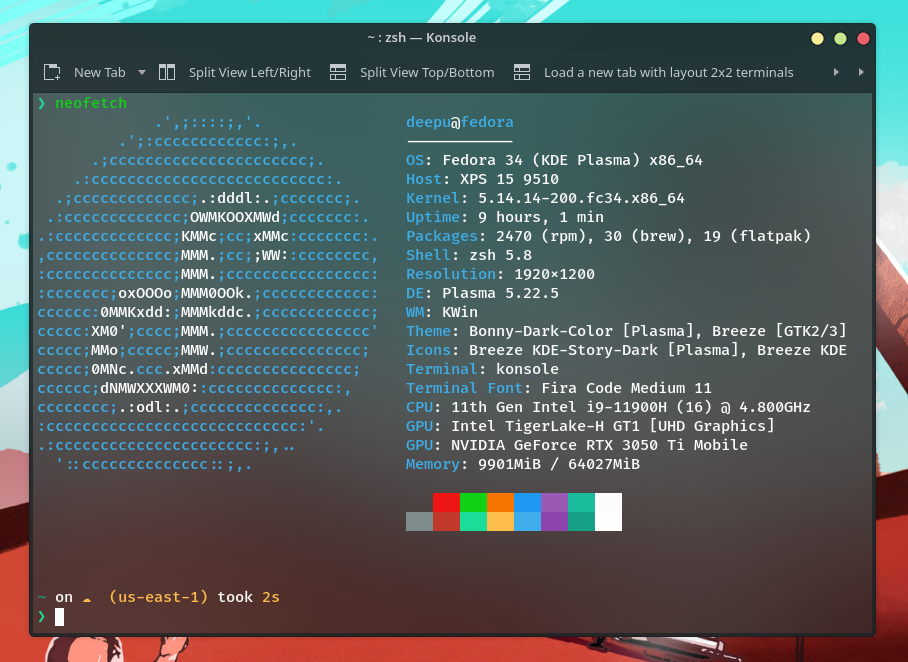 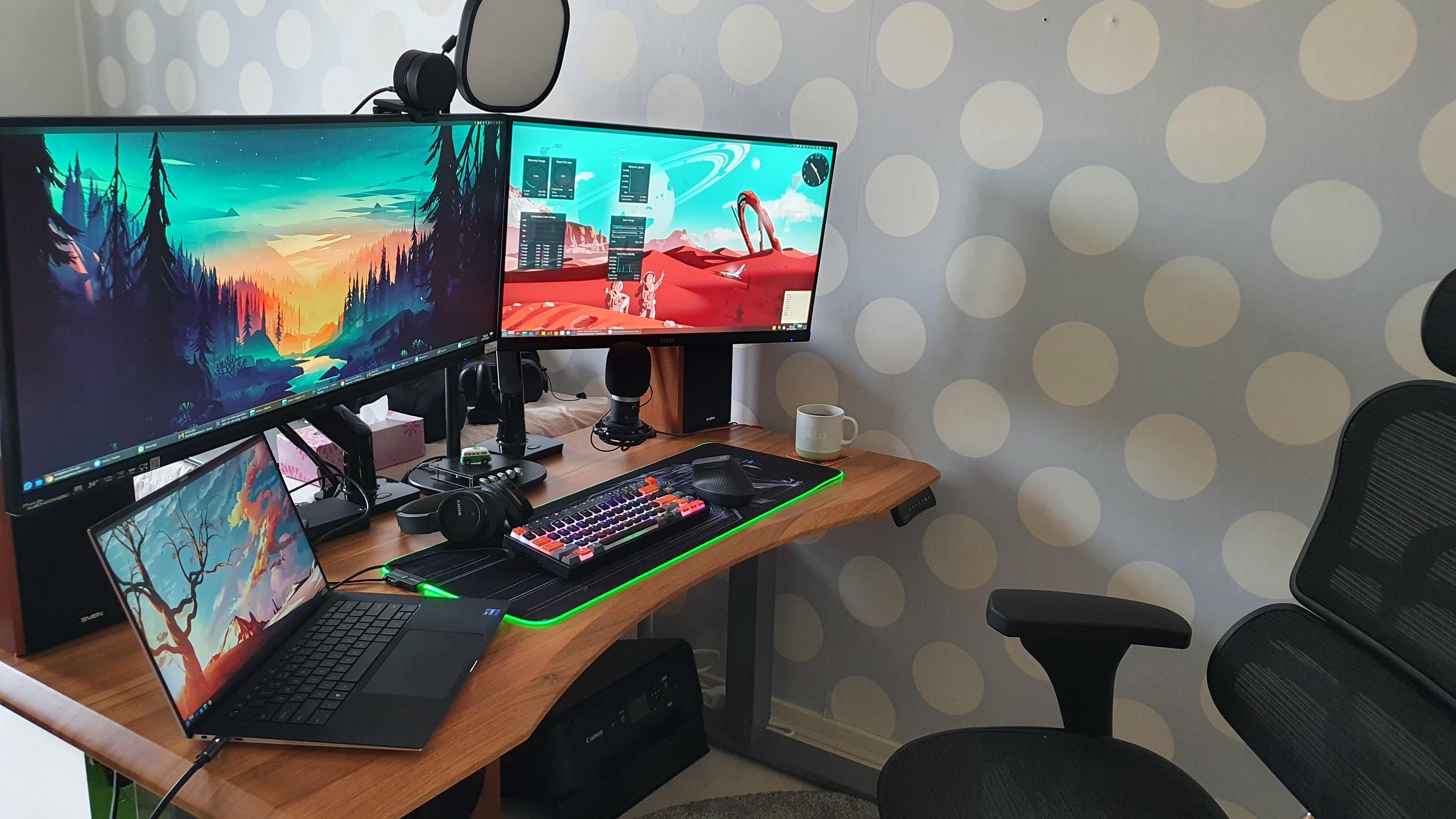 I use the laptop mostly with my home office, which consists of a 34 inch and a 27 inch monitor. A Keychron K2 keyboard, Logitech MX Vertical mouse, Razer Kiyo webcam, Elgato Keylight, Fifine mic and a Dell Thunderbolt dock that drives all my peripherals and monitors while powering the laptop all using a single USB-C cable. I have an old Sony Bluetooth headset and a cheap custom amplifier running a pair of old bookshelves and a subwoofer for audio.

Switching to Fedora was a great decision I made sometime in 2017, and I’m so happy with it. Updates are butter smooth. I don’t have to worry about stuff breaking all the time from rolling releases. At the same time, new stuff lands every six months, and packages are updated frequently, keeping everything running smoothly. For a developer, that is an excellent combination, in my opinion. So naturally, I choose to stick to Fedora; why fix something that isn’t broken, right?

So I’m running Fedora 34. I have been using Gnome for the past five years, but recently KDE caught my eyes, and I decided to give it a shot. So I went with the KDE spin of Fedora. KDE has been great so far. I love the amount of customization you can do on it, and top of all, it looks super sleek, and there is an excellent selection of themes and styles to choose from. I’m definitely not missing Gnome.

What good is a desktop without a nice theme, right? KDE has a great collection of themes, and I went with Ant-Dark theme for now, and it looks gorgeous with transparency and blur effects. While KDE themes are self-sufficient with icons, cursors, and lock screens, I switched from default icons to icons from KDE-Story theme. 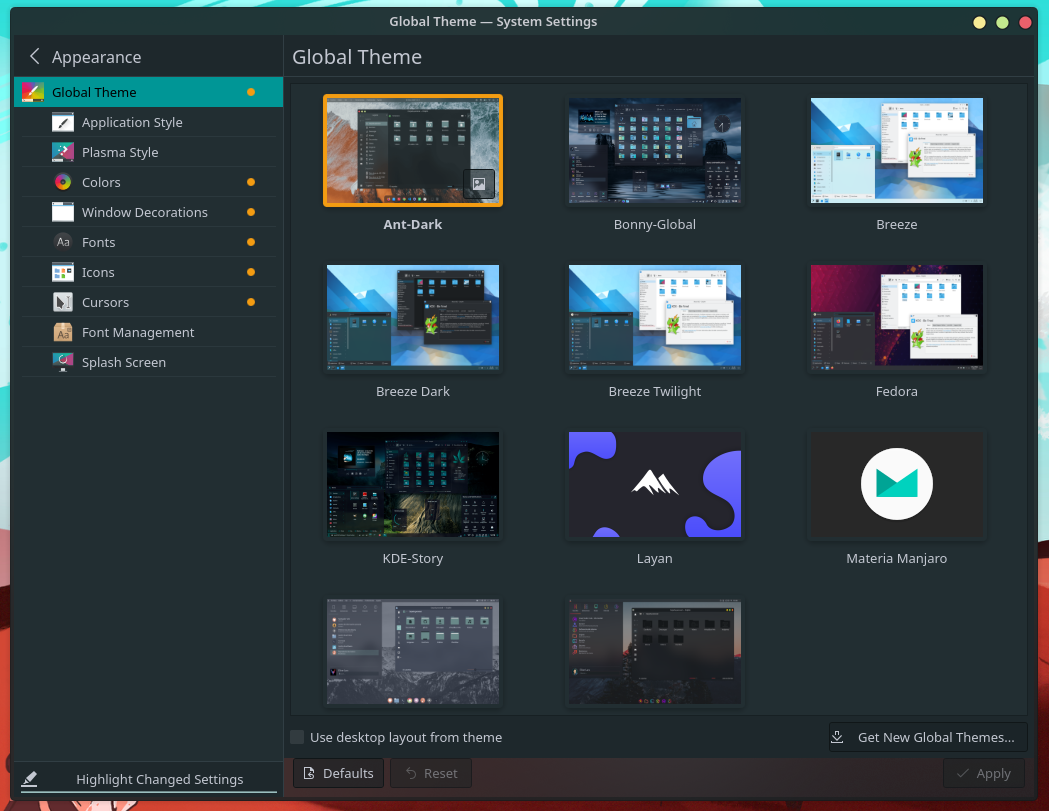 I use many plugins in Gnome, but in KDE, all those came out of the box, like clipboard manager, notepad, system monitor, etc. Another reason I’m enjoying KDE.

These are mostly objective choices and really don’t matter as long as you are comfortable with your chosen tools. Below are my choices for some of the important categories for development.

Shell: This is one of the most important for a developer. I use ZSH along with the awesome Starship prompt as my shell. I tried to switch to Fish, but it was quite annoying due to its difference with bash/ZSH, and I gave up on it. I went with the default theme and settings from Starship as it was very close to my earlier setup with Oh My ZSH. I also use zsh-autosuggestions and zsh-syntax-highlighting plugins for ZSH and fzf for search.

Terminal: What good is a nice shell without a good terminal. Fortunately, the default KDE shell, Konsole, is great, and KDE also has Yakuake, which is one of the best terminal applications out there. It has workspaces, tabs, split windows, Quake mode, etc. I mostly use Yakuake, which is bound to Ctrl+`

IDE: Visual Studio Code - My go-to editor. I love it. I use VSCode for web development, Rust, Go, JS development, DevOps, and everything other than JVM languages. A VSCode setup is never complete without some good plugins. Here are the plugins that I’m using. You can run the script to install those. For Java development, I use IntelliJ IDEA Ultimate.

DevOps: Docker, kubectl, Terraform, k3d, and so on

Productivity tools are also quite necessary, and below are my choices.

Browser: Google Chrome is my primary browser. I also use Firefox sometimes. I use the Bitwarden plugin for password management.

E-mail: I use Mailspring as my e-mail client. It’s a fairly decent mail client with nice themes and a simple UI.

Office suite: I mostly use Google Docs, but when I have to work on something on my desktop I use LibreOffice, which is a good office suite and even handles Microsoft Office & Keynote formats.

Communication: Of course I use Slack and for video conference I use Zoom. I also have Telegram and Signal installed.

Screen capture: I use this nifty tool called Peek for screen recording and Flameshot for screenshots.

Streaming: I think OBS Studio is the default choice here and is one of the best options for streaming and screen recording.

Image editing and processing: Gimp for photo editing, Inkscape for vector editing, and Draw.io for illustrations. KDE also has some default apps for photo management, which is quite good.

Video editing: Kdenlive is a great choice for video editing on Linux.

There are many other small and nifty utilities that I use; most are command-line utilities. There are some notable mentions like Timeshift, which is nice for backing up your machine.

Of course, not everything is perfect in the Linux world, but it is the same with every OS from my experience. Before switching to Linux, I was a long-time Windows user, and last year, I spent more than a year using macOS now and then, so issues are everywhere. So like every Linux user, I have from time to time messed things up(With great power comes great responsibility, Peter). There are some minor annoyances with this new setup, but there is nothing that bothers me much. Some of the most annoying issues I have currently are below, and I’ll probably fix them if it bothers me.

I hope you find this inspires you to give Linux a chance. If you have any questions, please ask in the comments.

« Prev post in series
« What is Developer Experience and why should we care? The state of pattern matching in Java 17 »
Never miss a story from us, subscribe to our newsletter