The state of pattern matching in Java 17

So what exactly is pattern matching?

Or simply put, it’s a language feature where you can test for a specific pattern on a character sequence or a data structure. Pattern matching can be classified into two types. 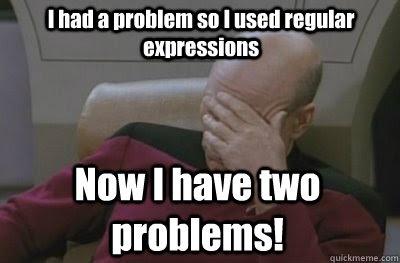 Why do we need pattern matching? We don’t, to be honest!

Pattern matching is not a requirement for a good programming language. Many of the most popular languages like JavaScript, Java, and Go get by just fine without it. But still, it’s a great feature to have due to these advantages it offers

Of course, these advantages depend on how a language implements pattern matching. So later, we will look at these from the perspective of Java.

It’s not an exhaustive list but more of a general expectation to fulfill the previous advantages we saw.

Unfortunately, Java is still a bit behind the curve when it comes to pattern matching.

From Java 16 onwards, we can do pattern matching using the instanceof operator. It can be used on if statements, and we can use it as type guards on variable assignments and returns. This lets us use a variable without further casting after a type check. This is a new syntax added to the language.

Here we can see pattern matching using the instanceof operator in action. A type and a variable name follow the operator, and we can access the variable without further casting.

We can also use pattern matching as a type guard in returns and variable assignments. See how concise the code is when we do the return using a type guard instead of casting the type.

Here is a variable assignment using a type guard. Again the code is much nicer with pattern matching.

For a realistic use case, we could do something like below, when we want to do different logic based on the type, using the instanceof operator. But that’s a lot of if-else and cognitive load.

But with the new preview feature in Java 17, we can do pattern matching for data types in switch cases as well. For Both, switch statements and switch expressions.

This will let us rewrite the previous code using a switch expression like below. As you can see, this is also a new syntax. And it’s similar to the one added to the instanceof operator.

This has Reduced cognitive complexity, and the syntax is closer to most other languages with pattern matching. With this, the compiler can warn us when pattern dominance occurs, as generic types should always come after specific types.

Since this is a preview feature, the syntax might change in future versions. I hope not, as I find this syntax nice in Java.

We can also do null checks in these switch cases, which makes pattern matching more useful in the case of Java.

As we saw earlier, Type guards are already supported for instanceof operator from Java 16 onwards, and Java 17 preview adds that for switch cases as well. This means we can rely on the type guards to refine the patterns further to have conditions, relations, and value checks.

While it’s not as flexible as in Rust or OCaml, it’s a good start, in my opinion.

A sealed class lets you control which class can extend it. The same applies to sealed interfaces as well.

Permitted classes can be defined either as simple inner classes or in separate class files using the new permits keyword.

A sealed class imposes three constraints on its permitted sub-classes.

A fun fact, non-sealed is the first hyphenated keyword in Java.

Here is how it would look in practice. Sealed classes can also be used with Records. Here the Shape interface is sealed, and it permits Circle, Rectangle, Square, and WeirdShape as subclasses.

Circle is implicitly final as it’s a record. Square is declared as final. And hence both cannot be extended further, and their hierarchy ends here.

WeirdShape is declared as non-sealed and hence can be extended by any other class or record. Here the class hierarchy is wide open, and subclasses of a WeirdClass do not have to follow the rules of a sealed class. All instances of subclasses of WeirdShape will also be an instance of WeirdShape, and hence any code that checks for exhaustiveness of subtypes of Shape will still be valid.

A sealed class can be abstract and can have abstract members, and similarly, sealed interfaces can have default implementations and so on. But abstract subclasses should be sealed or non-sealed and not final.

Extending a non-permitted class with a sealed class will be a compile-time error.

Another fun fact: A combination of sealed classes and records is nothing but algebraic data types. (type formed by combining others, ex, Tuples, Records, unions)

Remember pattern exhaustion we talked about? The java compiler cannot check for all possible variations for normal classes and hence would require us to add a default case to avoid missing paths in a switch expression, as switch expressions do not fall through and must be exhaustive in Java. That does not apply to switch statements as we can choose not to have a default case for them as they fall through.

But with sealed classes, the compiler knows exactly what the expected variants are. We can use this for exhaustive pattern matching. In that case, the compiler will warn when we miss a variant in the check without adding a default case. This is a much less error-prone and clearer approach. Even if the subclasses are non-sealed, the compiler will still do the exhaustiveness check.

There is a candidate feature to add preview for destructing/deconstruction syntax for the instanceof operator, so logically at some point, that should extend to the switch syntax as well. There are also talks about improving the feature further to add support for primitives in switch case patterns and to declare how it should be deconstructed at the class level so that normal classes can also be deconstructed.

So far, the only solid thing is the candidate for deconstruction in instanceof operator.

With this proposal, we should be able to deconstruct Records and Arrays. This is closer to how it works in Rust, for example. Look at how Point is deconstructed to its members, and we can directly use the members with type guard

Deconstruction can be nested as well but doesn’t have any facility for ignoring members like in other languages yet.

See how the string array is deconstructed to the first two elements with the rest ignored. The syntax is closer to the new array syntax as well.

Nested deconstruction is also possible for a mix of arrays and records. See how an array of Points are deconstructed here. And yes, var should work instead of type as well.

Of course, it’s a baby step and not as powerful as deconstruction in Rust or JS, but I hope we get there, and even this baby step would make pattern matching much more powerful.

So based on what we saw so far, the state of pattern matching in Java is as below.

Most of the basic requirements are met with the instanceof operator pattern matching, and the Java 17 preview makes many other features possible. Of course, type exhaustion only works for sealed classes, and refined patterns are still quite basic, but the majority of the features for proper pattern matching are already available with the preview.

To summarize, these are the current and future limitations as far as we can see

In a future version of Java, some of these limitations might be removed, at least for instanceof operator. We probably would still have to wait a few years before we can actually start using full-fledged pattern matching in production. I’ll update this post when more features are released.

« My sleek and modern Linux development machine in 2021 Concurrency in modern programming languages: Rust vs Go vs Java vs Node.js vs Deno vs .NET 6 »
Never miss a story from us, subscribe to our newsletter