In this chapter, we will look at the memory management of the Go programming language(Golang). Go is a statically typed & compiled language like C/C++ and Rust. Hence Go does not need a VM and Go application binaries include a small runtime embedded in them to take care of language features like Garbage collection, scheduling & concurrency.

This post is based on Go 1.13 default official implementation and concept details might change in the future versions of Go

First, let us see what the internal memory structure of Go is.

Go Runtime schedules Goroutines (G) onto Logical Processors (P) for execution. Each P has a machine (M). We will use P, M & G throughout this post. If you’re not familiar with the Go scheduler read Go scheduler: Ms, Ps & Gs first. 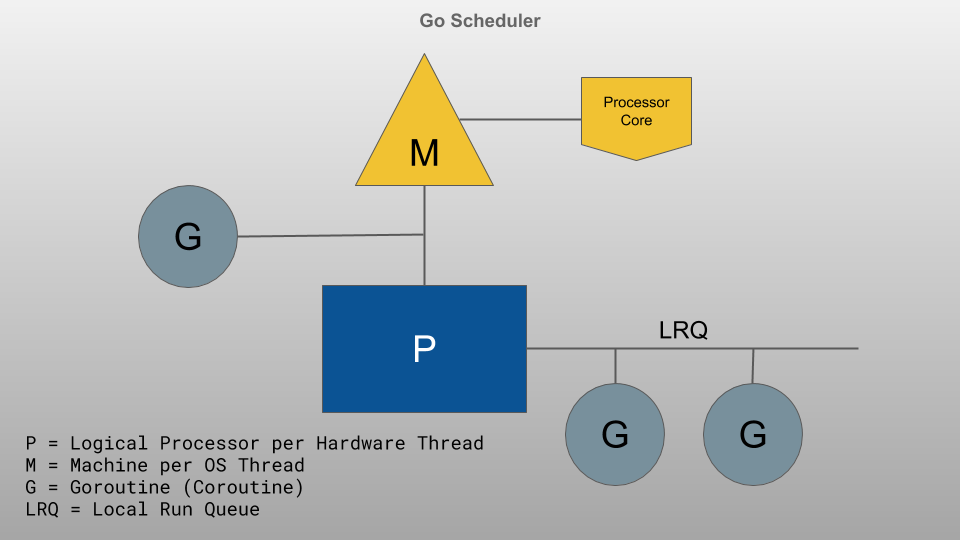 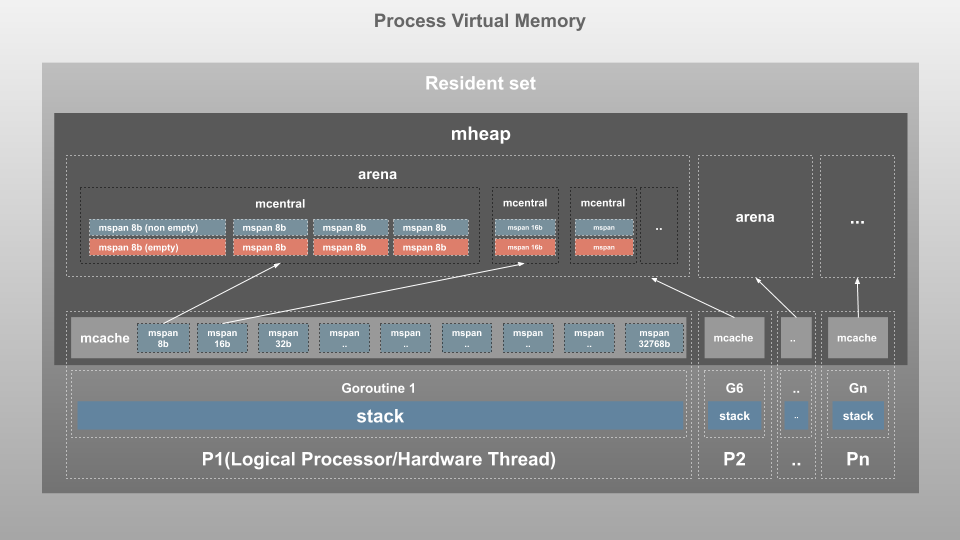 This is a simplified view based on the internal objects used by Go, In reality, Go divides and groups memory into pages as described in this great article.

This is quite different from the memory structure we saw in the previous chapters for JVM and V8. As you can see there is no generational memory here. The main reason for this is the TCMalloc(Thread-Caching Malloc), which is what Go’s own memory allocator was modeled upon.

Let us see what the different constructs are:

This is where Go stores dynamic data(any data for which size cannot be calculated at compile time). This is the biggest block of memory and this is where Garbage Collection(GC) takes place.

The resident set is divided into pages of 8KB each and is managed by one global mheap object.

Large objects(Object of Size > 32kb) are allocated directly from mheap. These large requests come at an expense of central lock, so only one P’s request can be served at any given point in time.

mheap manages pages grouped into different constructs as below:

This is the stack memory area and there is one stack per Goroutine(G). This is where static data including function frames, static structs, primitive values, and pointers to dynamic structs are stored. This is not the same as mcache which is assigned to a P

Now that we are clear about how memory is organized let’s see how Go uses Stack and Heap when a program is executed.

Let’s use the below Go program, the code is not optimized for correctness hence ignore issues like unnecessary intermediatory variables and such, the focus is to visualize stack and heap memory usage.

One major difference Go has compared to many garbage collected languages is that many objects are allocated directly on the program stack. The Go compiler uses a process called escape analysis to find objects whose lifetime is known at compile-time and allocates them on the stack rather than in garbage-collected heap memory. During compilation, Go does the escape analysis to determine what can go into Stack(static data) and what needs to go into Heap(dynamic data). We can see these details during compilation by running go build with -gcflags '-m' flag. For the above code, it will output something like the below:

Let us visualize this. Click on the slides and move forward/backward using arrow keys to see how the above program is executed and how the stack and heap memory is used:

The Stack as you can see is automatically managed and is done so by the operating system rather than Go itself. Hence we do not have to worry much about the Stack. The Heap, on the other hand, is not automatically managed by the OS and since it’s the biggest memory space and holds dynamic data, it could grow exponentially causing our program to run out of memory over time. It also becomes fragmented over time slowing down applications. This is where garbage collection comes in.

Many programming languages that employ Garbage collection use a generational memory structure to make collection efficient along with compaction to reduce fragmentation. Go takes a different approach here, as we saw earlier, Go structures memory quite differently. Go employs a thread-local cache to speed up small object allocations and maintains scan/noscan spans to speed up GC. This structure along with the process avoids fragmentation to a great extent making compact unnecessary during GC. Let’s see how this allocation takes place.

Go decides the allocation process of an object based on its size and is divided into three categories:

Tiny(size < 16B): Objects of size less than 16 bytes are allocated using the mcache’s tiny allocator. This is efficient and multiple tiny allocations are done on a single 16-byte block.

Small(size 16B ~ 32KB): Objects of size between 16 bytes and 32 Kilobytes are allocated on the corresponding size class(mspan) on mcache of the P where the G is running.

In both tiny and small allocation if the mspan’s list is empty the allocator will obtain a run of pages from the mheap to use for the mspan. If the mheap is empty or has no page runs large enough then it allocates a new group of pages (at least 1MB) from the OS.

Large(size > 32KB): Objects of size greater than 32 kilobytes are allocated directly on the corresponding size class of mheap. If the mheap is empty or has no page runs large enough then it allocates a new group of pages (at least 1MB) from the OS.

Note: You can find the above GIF images as slideshow here

Now that we know how Go allocates memory, let us see how it automatically collects the Heap memory which is very important for the performance of an application. When a program tries to allocate more memory on the Heap than that is freely available we encounter out of memory errors. An incorrectly managed heap could also cause a memory leak.

Go manages the heap memory by garbage collection. In simple terms, it frees the memory used by orphan objects, i.e, objects that are no longer referenced from the Stack directly or indirectly(via a reference in another object) to make space for new object creation.

As of version 1.12, the Golang uses a non-generational concurrent tri-color mark and sweep collector. The collection process roughly looks like the below, I don’t want to go into details as it changes from version to version. However, if you are interested in those, then I recommend this great series.

The process starts when a certain percentage(GC Percentage) of heap allocations are done and the collector does different phases of work:

Let us see these in action for a single Goroutine. The number of objects is kept small for brevity. Click on the slides and move forward/backward using arrow keys to see the process:

This has some stop-the-world process but it’s generally very fast that it is negligible most of the time. The coloring of objects takes place in the gcmarkBits attribute on the span.

This post should give you an overview of the Go memory structure and memory management. This is not exhaustive, there are a lot more advanced concepts and the implementation details keep changing from version to version. But for most Go developers this level of information would be sufficient and I hope it helps you write better code, considering these in mind, for more performant applications, and keeping these in mind would help you to avoid the next memory leak issue you might encounter otherwise.

I hope you had fun learning this, stay tuned for the next post in the series.

« Prev post in series Next post in series »
« Polyglot inception with GraalVM. Why? Because it's fun 🏄 Forget NodeJS! Build native TypeScript applications with Deno 🦖 »
Never miss a story from us, subscribe to our newsletter