In this chapter, we will look at the memory management of the Rust programming language. Rust is a statically typed & compiled systems programming language like C & C++. Rust is memory & thread-safe and does not have a runtime or a garbage collector. I previously also wrote about my first impressions of Rust.

This post is based on Rust 1.41 official implementation and concept details might change in the future versions of Rust

Compared to other languages we saw until now in this series, Rust is quite unique let us see how.

First, let us take a look at the internal memory structure of Rust.

Rust doesn’t have a defined memory model in the language specifications as of now and the memory structure is quite straightforward.

Each Rust program process is allocated some virtual memory by the Operating System(OS), this is the total memory that the process has access to. 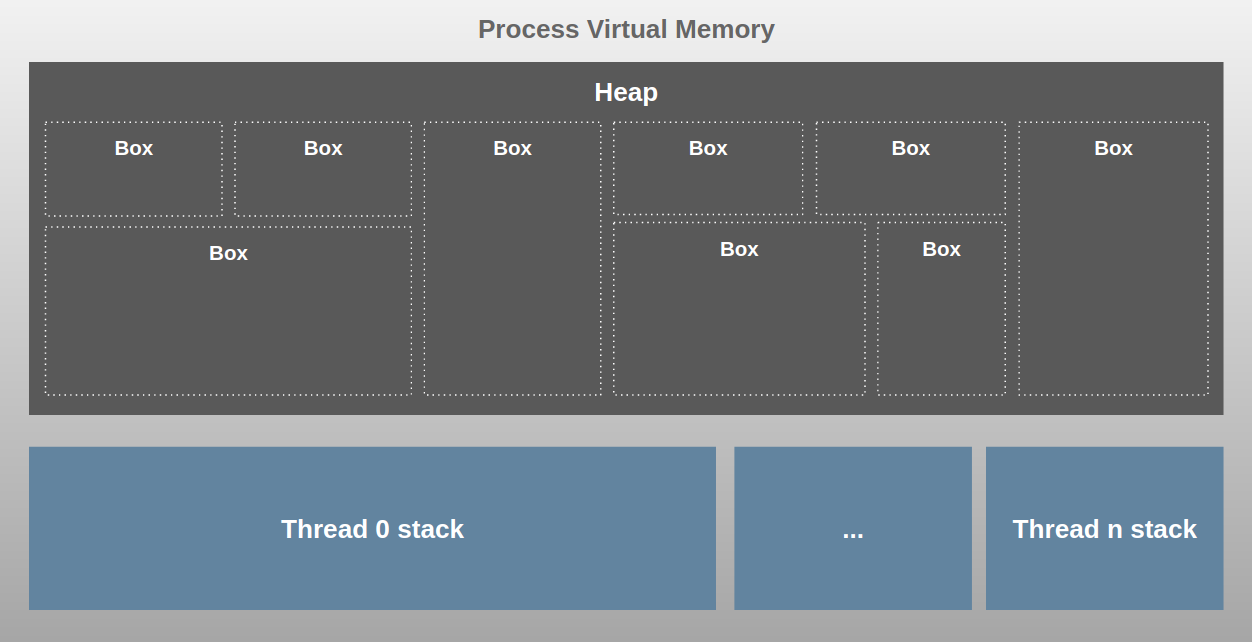 This is quite simple compared to the memory structure we saw in the previous chapters for JVM, V8 and Go. As you can see there is no generational memory or any complex substructures since Garbage Collection(GC) is not involved. The reason for this is that Rust manages memory as part of program execution during runtime using the Ownership model rather than using any kind of GC.

Let us see what the different memory are:

This is where all dynamic data(any data for which size cannot be calculated at compile time) is stored. This is the biggest block of memory and the part managed by Rust’s Ownership model.

This is the Stack memory area and there is one Stack per thread. This is where static values are allocated by default. Static data(data size known at compile time) includes function frames, primitive values, Structs and pointers to dynamic data in Heap.

Now that we are clear about how memory is organized let’s see how Rust uses Stack and Heap when a program is executed.

Let’s use the below Rust program, the code is not optimized for correctness hence ignore issues like unnecessary intermediatory variables and such, the focus is to visualize Stack and Heap memory usage.

All values in Rust are allocated on the Stack by default. There are two exceptions to this:

In both exception cases, the value will be allocated on Heap and its pointer will live on the Stack.

Let us visualize this. Click on the slides and move forward/backward using arrow keys to see how the above program is executed and how the Stack and Heap memory is used:

The Stack as you can see is automatically managed and is done so by the operating system rather than Rust itself. Hence we do not have to worry much about the Stack. The Heap, on the other hand, is not automatically managed by the OS and since its the biggest memory space and holds dynamic data, it could grow exponentially causing our program to run out of memory over time. It also becomes fragmented over time slowing down applications. This is where Rust’s ownership model steps in to automatically manage the Heap memory

Note: you can find the code I used to identify where a value ends up here

Rust has one of the most unique ways of managing Heap memory and that is what makes Rust special. It uses a concept called ownership to manage memory. It is defined by a set of rules

The rules are applicable regardless of the value being in Stack or Heap memory. For example, in the below example the value of foo is dropped as soon as the method execution completes and the value of bar is dropped right after the block execution.

These rules are checked by the compiler at compile-time and the freeing of memory happens at runtime along with program execution and hence there is no additional overhead or pause times here. So by scoping variables carefully, we can make sure the memory usage is optimized and that is also why Rust lets you use block scope almost everywhere. This might sound simple but in practice, this concept has deep implications in how you write Rust programs and it takes some getting used to. The Rust compiler does a great job of helping you along the way as well.

Due to the strict ownership rules, Rust lets you change the ownership from one variable to another and is called a move. This is automatically done when passing a variable into a function or when creating a new assignment. For static primitives, a copy is used instead of move.

RAII stands for Resource acquisition is initialization. This is not new in Rust, this is borrowed from C++. Rust enforces RAII so that when a value is initialized the variable owns the resources associated and its destructor is called when the variable goes out of scope freeing the resources. This ensures that we will never have to manually free memory or worry about memory leaks. Here is an example

In Rust we can pass a variable by either value or by reference and passing a variable by reference is called borrowing. Since we can have only one owner for a resource at a time, we have to borrow a resource to use it without taking ownership of it. Rust compiler has a borrow checker that statically ensures that references point to valid objects and ownership rules are not violated. Here is a simplified version of the Rust official example.

The lifetime of variables is another very important concept to make the ownership model work. It is a construct used by the borrow checker in order to ensure that all references to an object is valid. This is checked during compile time. The lifetime of a variable begins when its initialized and ends when it is destroyed. Lifetime is not the same as the scope.

This might sound straight forward but lifetimes get much more complex once functions and structs with references come into play and once they do then we would need to start using lifetime annotations to let the borrow checker know how long references are valid. Sometimes the compiler can infer lifetimes, but not always. I’m not going to details here as its not in the scope of this article

Now that we have seen different concepts used for Ownership, let us visualize it, unlike other languages where we visualized the data in Heap, here it is much easier if we look at the code itself. 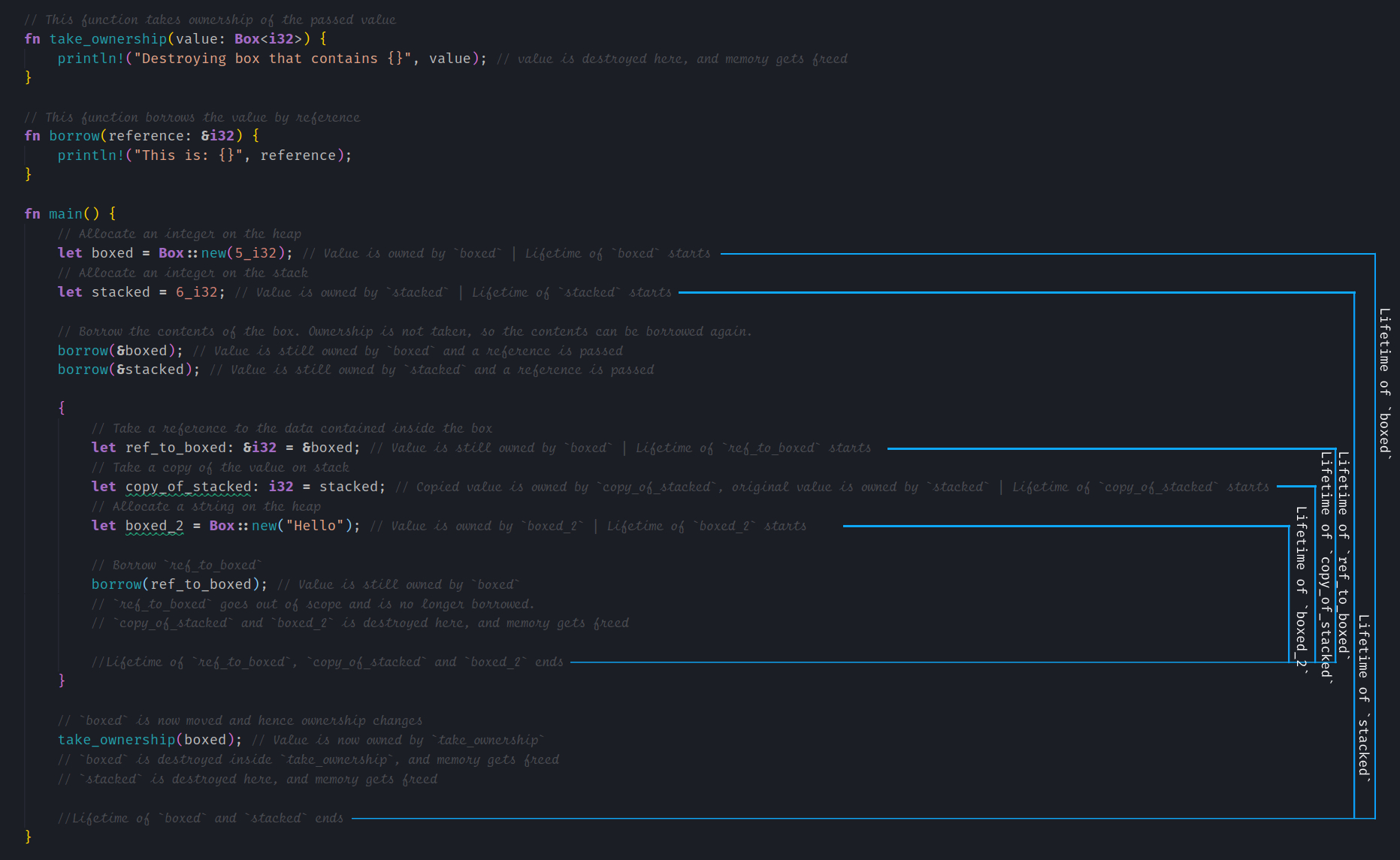 This post should give you an overview of the Rust memory structure and memory management. This is not exhaustive, there are a lot more advanced concepts and the implementation details keep changing from version to version. Unlike Garbage collected languages, where you need not understand the memory management model to use the language, in Rust, it is required to understand how Ownership works in order to write programs. This post is just a starting step, I recommend that you dive into the Rust documentation to learn more about these concepts.

I hope you had fun learning this, stay tuned for the next post in the series.

« Prev post in series Next post in series »
« Forget NodeJS! Build native TypeScript applications with Deno 🦖 Avoiding Memory Leaks in NodeJS: Best Practices for Performance »
Never miss a story from us, subscribe to our newsletter