Microservices - the good, bad, and the ugly

So you are attending this awesome conference where speaker after speaker talks about how awesome microservices are. You hear a speaker from a Tech giant presenting how they scaled up and solved their issues using microservices running on containers or something, and you wonder shouldn’t we do the same as well?

The reality is that there is no silver bullet in software engineering. Microservices doesn’t magically solve every scaling issues, some times they introduce more problems then they solve.

In a microservice architecture, you generally split your domain model into individual loosely coupled services that can be deployed and scaled individually. Each of the services is in itself a small application with its own architecture and even runtime sometimes.

The services might offer REST endpoints that can be aggregated by an application acting as a gateway or the services could be communicating with each other using a messaging system. Some services might have Web GUI some are headless services offering just an API.

In microservice architectures, each service is responsible for handling its data and ideally do not share database schema with other services. Such architectures make it easy to provide different clients for Mobile and Desktop experience which can be scaled independently based on demand. 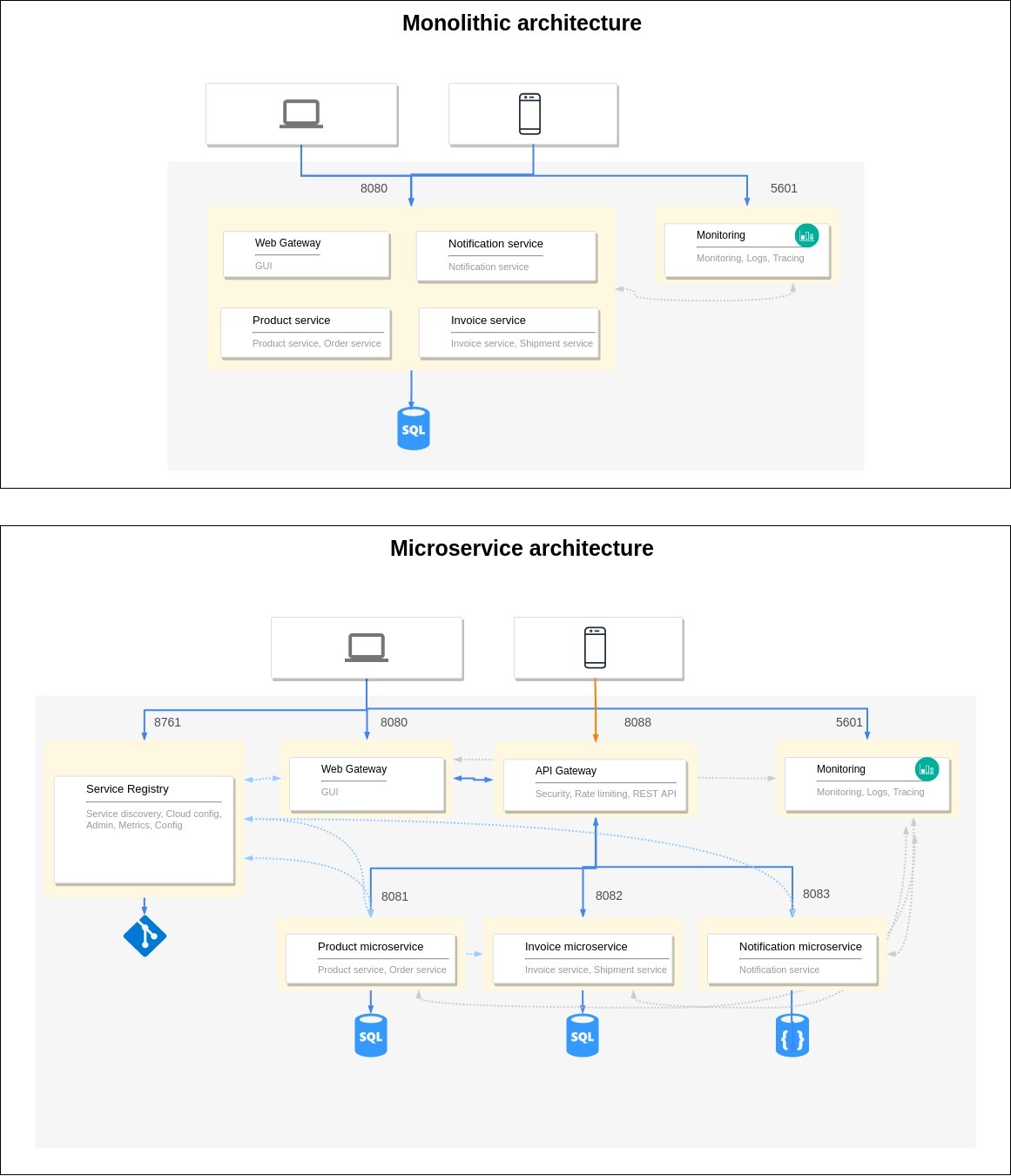 There are different architecture patterns for building microservices. The patterns used also decides the way services communicate and the way they are aggregated.

This article details some of these patterns quite nicely.

So let’s break down the benefits and issues of microservice architecture and see when it makes sense to adopt one and when to avoid one.

In general, Microservices provide(As it depends on how you actually implement it) or at least promise the below benefits, which can be grouped into three major categories

Such systems also provide other benefits like, for example, a memory leak in one of the services, are isolated and hence will not bring down the entire application. Hence overall single point of failures are reduced

Loosely coupled individual components will start up much faster than a big monolith making it possible to parallelize and improve overall start-up for large systems.

It also makes it easy to refactor existing features as you can gradually refactor things rather than having to refactor an entire system in one go.

In a well-implemented microservice architecture, development turnaround is faster and hence you get a better time to market for new features and easier refactoring of existing features.

A complex problem domain can be easily tackled by splitting it into separately manageable services making it easier to understand and maintain in the long run.

Technology adoption is easier, components can be independently upgraded in incremental migration making it possible to have a different stack for each component.

It is also possible to have different microservices in a system use different implementation languages and just communicate using a common messaging format like gRPC or a message queue or pub/sub, thus making it possible to have teams with different language skills hence less dependency on a single language or stack.

Teams will be less dependent on each other as communication between systems is governed by a public API or contract letting you change internals without having to worry about breaking someone else’s code.

Best suited for agile teams. Such teams can have better focus as they only need to worry about a single service.

One of the most important benefits of a microservice architecture is the ability to scale individual components based on load. If implemented properly this will result in ideal load distribution and reduced overall infrastructure cost. Services with more demand can be scaled up while the ones with less demand can be scaled down utilizing infrastructure more efficiently.

Deploying services independently also makes the application more reliable and makes patching easier as you do not have to upgrade the entire application to fix an issue in a single service.

Complexity is one of the biggest side effects of this architecture. While microservices can reduce the domain complexity by breaking the problem into smaller services, there could be complexities of a distributed system in terms of;

End-to-end tests and integration tests become harder to perform there are more moving parts in the stack and more complex communication between components. The testing infrastructure required also becomes more difficult to set up and maintain.

The technical stack for microservices is more complex and most of the time harder to learn and hence it would demand a more experienced team with more senior-level skillset than that would be required for a similar monolithic application.

It will also require a bigger team to maintain the application as there are more components and more technologies involved.

Team members share varying skill sets based on the component they work on but might not be having a birds-eye view of the entire application making business requirements harder to visualize and cross-cutting issues harder to fix.

Complex microservices will have the additional overhead of running monitoring setup, messaging services, orchestration, service registry and so on.

Initial development time will be higher due to the complexity making time to market slower.

The overall cost of the initial infrastructure might be much higher than that of a similar monolith.

In microservice architectures, there is always code duplication between services which also can be considered overhead.

When you should not be considering Microservice architectures

You should not be using microservice architecture unless you absolutely have to, remember not every application has the same scale requirements as Netflix, Google, Amazon or Spotify. Many of the benefits that microservices provide to these kinds of applications are due to their sheer scale which might not be applicable to you. So here are some reasons not to choose microservices and maybe stick to monoliths.

When you could consider Microservice architectures

In general, Microservices tend to be beneficial if you have one of the below scenarios.

So in conclusion, don’t choose an architecture pattern because it works for someone else, choose a pattern that is appropriate for your use case, scale and requirements. Not everyone needs to handle millions of concurrent users or stream terabytes of data.

If you liked this article you might like my book as well. You can get it from Packt and Amazon.

If you do decide to build microservices checkout JHipster and my below articles don’t forget to give it a star on Github.

« Easy functional programming techniques in TypeScript for everyone My first impressions of Rust »
Never miss a story from us, subscribe to our newsletter